I was going to send a copper lampshade we weren't using to the charity shop but thought it might be able to become quite a good drum instead. I have been eying up toy drums online for a while as whenever the music box comes out at our toddler group the drums are the most popular instrument, but this alternative cost me nothing and has given the littles just as much enjoyment!

We had to experiment a bit with potential drum skins - starting off with a sheet of baking parchment secured with cellotape. This worked and produced a sound like a snare drum but was too fragile and tore after some enthusiastic drumming. 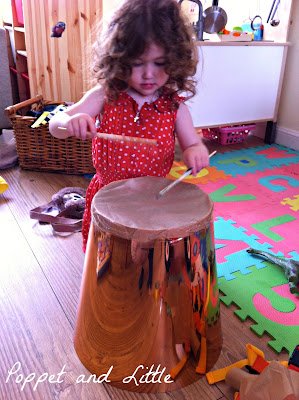 We then tried some vinyl tablecloth but it was too thick and we tried cling film too but that didn't work at all. Throughout all this Poppet was excitedly declaring "lets make a drum mum!" And had a great time going mad wrapping cellotape around things she found lying around trying to make her own one "I making a drum!"

I did a bit of googling and came across this youtube video from Child's Play Music which shows you how to make a drum using parcel tape (I also really liked the video they had on water play and music exploration and plan to do this one day). The parcel tape worked really well and produced a great sounding drum. Poppet loved helping. We stuck down strip upon strip of parcel tape, crossing them all over in the centre until every inch was covered in at least two layers. Then we pressed it down all over to make sure all the strips were stuck together.


We were on a drum roll (gettit?!) so we also made a smaller one using a cake tin with the bottom removed. We learnt that a drum needs air underneath it to allow it to vibrate, so when the drums were flat on the floor they didn't sound as good as when they were raised up. With this in mind we raised them up using crates or books to improve the sound. We used chop sticks for drumsticks and set the drums up along with the other instruments we own (an xylophone and a set of maracas) to create a complete music station! 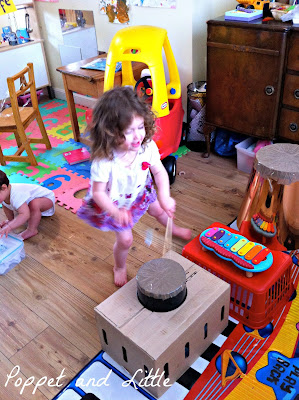 Both girls loved it and so did I, you could make some really good beats with them (is that even the correct terminology?! I have no idea!). We have played many different games using the drums. Poppet was really good at banging along in time while singing, although if I attempted to join in she would yell at me "no, I sing it!". We also explored tempo and volume by pretending to be dinosaurs (big, loud, slow thumps of the drum) and mice (little, light, quick taps of the drum), rhinos and rabbits, elephants and spiders. 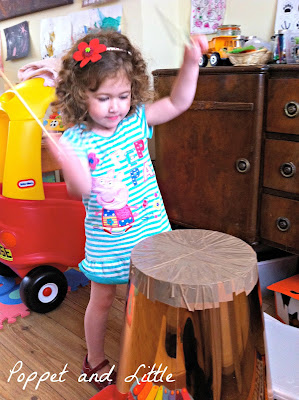 We used them to explore numbers and counting, with me counting out a certain number of beats and then getting Poppet to copy me. We used different utensils for drumsticks to see what sounds they made - whisks, wooden spoons, plastic sticks etc... The drums have been really popular toys, even with Little! 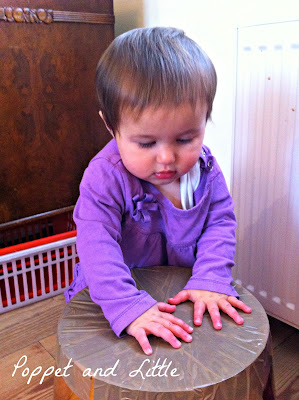 Hi, I'm Lisa. I'm a stay at home mama to two razimals (Poppet and Little),and I live in Scotland. I use this blog to write about what we get up to during the day and other things that interest me!